Do you like change? If you do, then living in the present is an exhilarating experience.  For those who don’t, buckle up as we are only going to see unprecedented innovations at exponential rates involving technology.  You can’t run or hide from it. The revolution, or evolution depending on your respective lens, of our world, will transform everything as we know it. We must adapt, but more importantly, prepare our learners for a bold new world that is totally unpredictable.  Welcome to the Fourth Industrial Revolution.

In Learning Transformed, my co-author Tom Murray and I looked in detail at the disruptive changes we are all seeing currently, but also those that are yet to come.  Below provides a synopsis of the book:

Today’s pace of technological change is staggering, and the speed of current breakthroughs has no historical precedent. Consumers may seem well-versed with the latest personal gadgets, yet growth in artificial intelligence (AI), robotics, autonomous vehicles, the Internet of Things (IoT), and nanotechnology remains hardly known except to technology gurus who live and breathe ones and zeros. The coming interplay of such technologies from both physical and virtual worlds will make the once unthinkable, possible.

We believe that we are in the first few days of the next Industrial Revolution and that the coming age will systematically shift the way we live, work, and connect to and with one another. It will affect the very essence of the way humans experience the world. Although the 2000s brought with them significant change in how we utilize technology to interact with the world around us, the coming transformational change will be unlike anything mankind has ever experienced (Schwab, 2016).

The Fourth Industrial Revolution, toward which we are facing as a society, is still in its infancy but growing exponentially. Advances in technology are disrupting almost every industry and in almost every country. No longer do natural or political borders significantly reduce the acceleration of change.

Today, we are taking our first steps into the Fourth Industrial Revolution, created by the fusion of technologies that overlap physical, biological, and digital ecosystems. Known to some as Industry 4.0, these possibilities have been defined as “the next phase in the digitization of the manufacturing sector, driven by four disruptions: the astonishing rise in data volumes, computational power, and connectivity; the emergence of analytics and business-intelligence capabilities; new forms of human-machine interaction such as touch interfaces and augmented-reality systems; and improvements in transferring digital instructions to the physical world, such as advanced robotics and 3-D printing” (Baur & Wee, 2015). Such systems of automation enable intelligence to monitor the physical world, replicate it virtually, and make decisions about the process moving forward. In essence, machines now have the ability to think, problem solve, and make critical decisions. In this era, the notion of big data and data analytics will drive decision-making.

To prepare learners for success during the fourth, or even fifth, industrial revolution the notion of education has to change at scale. If all of the change we are seeing has taught us one major lesson it is that schools must prepare kids to do anything, not something. Having current and future generations go through the motions and “do” school just won’t cut it. Just because it worked for us as adults, does not mean it works or even serves, well for our learners.  The transition to the Fourth Industrial Revolution does not spell doom and gloom for society as we know it. The idea here is to be proactive, not reactive, and to understand where opportunities lie for growth and improvement in education systems across the globe.

There are two images that come to mind that represent the need to reflect on where education is at in order to move to where it needs to be.  The first one below pulled from an article titled Automate This: Building the Perfect 21st-Century Worker, represents the skills our learners will need to compete in a more automated world. 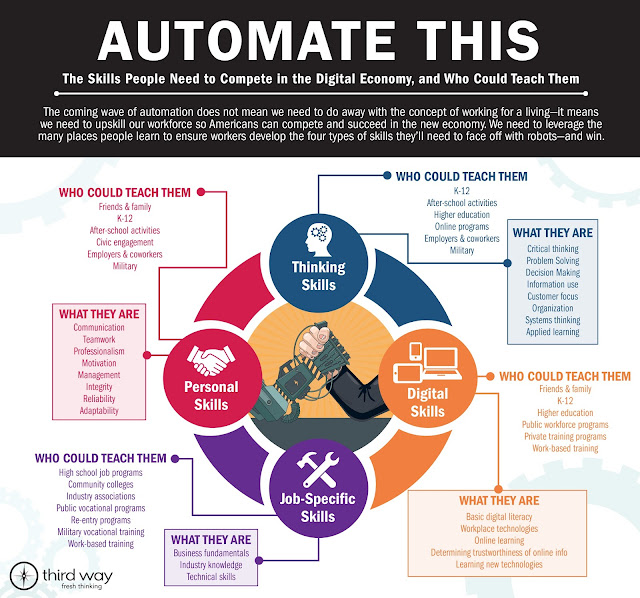 The second image comes courtesy of futurist Gerd Leonhard. This image is a simple, yet powerful reminder of the critical role soft skills and qualities that cannot be measured with traditional metrics will play in preparing learners for success during the Fourth Industrial Revolution. 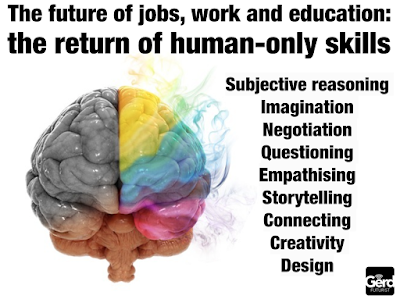 As Tom and I state in Learning Transformed, “To prepare students for their world of work tomorrow, we must transform their learning today.” Skills are important, but we need to nurture competent learners who can think divergently, exhibit empathy, ask more questions than seek answers, and empower them to own their learning.  It begins with taking a critical lens to our work followed by active reflection to determine if we are on the right path. However, it is important to understand that paths can and should readily change and that there might be multiple paths taken to get our kids to where they need to be.  Are your learners prepared for the Fourth Industrial Revolution?