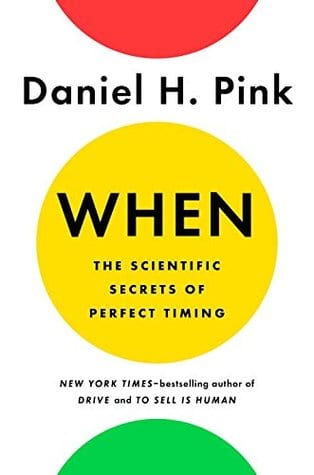 The author laments that there are too many “how-to” books in the marketplace, so instead he exalts us to think of this book as a new genre altogether – a “when-to” book: when to change careers, deliver bad news, schedule a class, end a marriage, go for a run, or get serious about a project or a person.

The book is well organised and well thought-out, as evidence from the flow of the topics in each part (there are three), with a useful “Time Hacker's Handbook” at the end of each chapter. Be sure to check out the ultimate guide on when to exercise as well as the four tips for a better morning in the first chapter of the “Time Hacker's Handbook”. These alone are well worth learning about the science of timing.

The author says that timing wasn't everything, but it was a big thing, at least when it comes to standardised test. He cites research that suggests students scored higher in the mornings than in the afternoons. That doesn't mean schools have to move all tests to the morning (which would be impractical). Instead, researchers discovered another remedy that is easier to implement: restorative breaks.

Based on research, it appears that test scores go up by a higher amount after breaks. In fact, taking a test in the afternoon without a break produces scores that are equivalent to spending less time in school each year and having parents with lower incomes and less education. But taking the same test after a 20 to 30-min break leads to scores that are equivalent to students spending three additional weeks in the classroom and having somewhat wealthier and better-educated parents.

In the same vein, the author makes a similar case for adults by way of taking naps. Be sure to follow up on the tips in chapter 2 of the “Time Hacker's Handbook”.

Time Hacker's Handbook
This is essentially a collection of tips to help you put the insights into action. True to form, there is a guide on when to quit a job in chapter 5 of the handbook.

If you don't realise by now, this is actually a “how-to” book about “when”.

There is also an interesting discussion on chronotypes (larks, owls and third birds). Generally, young children are larks who wake up early, buzz around throughout the day, but don't last very long beyond the early evening. When these larks morph into owls around puberty, they wake up later, gain energy during the late afternoon and evening, and fall asleep well after their parents.

The problem is, most secondary schools force teenage owls into schedules designed for chirpy seven-year-old larks. As a result, teenage students get insufficient sleep and are at higher risk for depression, suicide, substance abuse and car crashes, according to the journal Pediatrics. But there is resistance for starting secondary school at a later time. Why? One of the reasons is that starting later is inconvenient for adults.

The story of the Mumbai dahbhawalas in part three will blow your mind. Five years and zero misdelivered lunch. Beat that, foodpanda, Deliveroo, GrabFood and whatever.

There are plenty of notes at the back of the book, but I'm a lazy reader with a failing eyesight so I skipped most of that section.