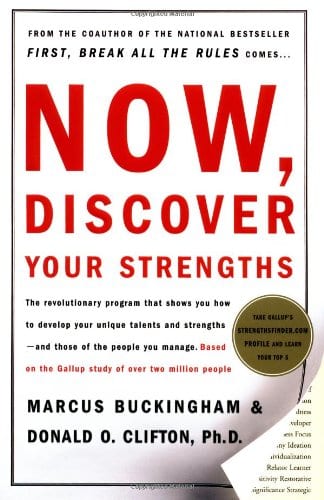 The central theme (ahem!) of this book – that we should focus on developing strengths rather than correcting weaknesses – has a lot merit and the research seems to back up the authors' claim that this is a better use of the limited resources we have.

For those who are not familiar with the StrengthsFinder Profile, the 34 talent themes outlined in the book do not capture every single human idiosyncrasy. Just like the 88 keys on a piano cannot play every single note that can possibly be played. However, by playing the keys in many different combinations, they can capture everything from classic Mozart to classic Madonna.

According to the authors (Marcus Buckingham and Donald O. Clifton), even seemingly negative traits can be called talents if they are productively applied. An extreme and rare example is dyslexia, looked upon as a “frailty” by most. Lawyer David Boies is dyslexic and his dyslexia causes him to shy away from long, complicated words. However, in the antitrust suit against software giant Microsoft, Boies wore down Bill Gates with his persistently polite questioning during the pre-trial deposition.

If you have no patience, go to Chapter 4 to read the description of all 34 themes of StrengthsFinder. When you are running through the themes, you may find yourself perplexed by some of the words used to label the talents. This seems to contradict the authors' claim that a revolutionary, common and precise language is now used to describe the talents. Some of the themes, like activator, ideation, intellection, even “Woo”, may leave you scratching your head.

Fortunately, Chapter 5 is more beneficial as it includes a list of questions you may want to ask about the StrengthsFinder and the talent themes. It's like an FAQ section, but with a great deal of insights.

The point here is not that we should just focus on the strengths and ignore the weaknesses. The problem is that we have the tendency to focus on weaknesses most of the time.

Consider this scenario: Suppose your child returns home with the following grades – an A in English, an A in social studies, a C in biology, and an F in algebra. Which of these grades would you focus on? According to the authors' research, 77 percent of parents chose to focus on the F in algebra, only 6 percent on the A in English, and an even more minuscule number (1 percent) on the A in social studies.

If you insist, move on to the question – “How can I manage around my weaknesses?” – to read about the most effective way to manage a weakness.

On the question of whether a talent theme can be too dominating, the authors explained that, quite the contrary, a person can only have not enough of another talent theme, instead of too much of a particular one. For example, rude people don't have too much Command. They have insufficient Empathy.