Research continues to prove beyond any doubt that play is vitally important to the healthy development of a child; physical, cognitive, social, emotional and language. More parents and educators are now subscribing to the belief that play is one of the best ways children learn.

Why is play such an important part of children's development, and how do children learn through play?

Johnson (1993) describes play as both a window of development and opportunity for learning. Play is the natural way in which children learn and connect with, and build an understanding of the world and people around them. Through play, children develop critical thinking, problem solving, creativity, imagination, perseverance and resilience – essential skills for the 21st century. 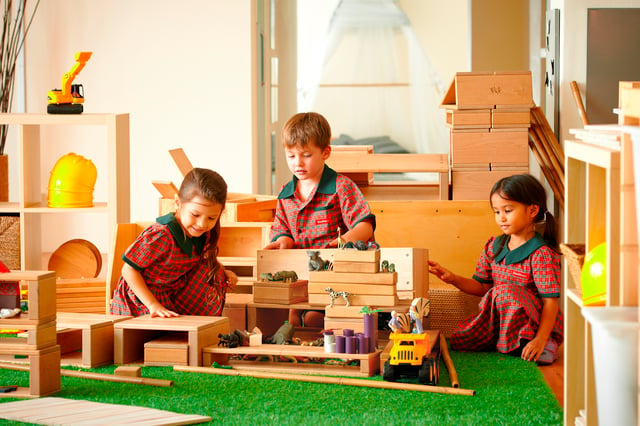 How does play benefit children's development in the early years?

1. Socio-Emotional Development
Playful social interaction begins at birth (Bergen, 2002; Bredecamp & Copple, 1997). As children grow older, they engage in pretend play and dramatic play. As children interact with one another, they learn how to cooperate, listen to others, cope with frustration, and empathise with others – all of which are important in the development of self-regulation and social negotiation.

2. Literacy Development
Play and literacy are interrelated. Play is enhanced when children draw from their knowledge and prior experiences with stories and topics they have been exposed to through books and conversation. Pretend play also allows children to develop oral language skills, expand their vocabulary, and explore the function of written language as a means of early literacy.

3. Mathematical development
Play contributes to the development of logical and mathematical thinking. Through hands-on and fun experiences, children participate in problem-solving, discovery and exploration of cause and effect. For example, a child building with blocks is learning both classifying and seriating (arranging items in a sequence).

Gross motor development, such as hopping and skipping, develops in a similar fashion. When children learn to hop, they practise hopping on different feet. As they grow up, they integrate hopping skills into many games, such as hopscotch and jump rope games. Using their bodies during play also enables children to feel physically confident, secure, and self-assured (Isenberg & Quisenberry, 2002).

5. Creative development
Play is ideal for supporting children’s creativity and imagination because it offers a risk-free environment. Research supports the notion that play and creative thought are related behaviours because they both rely on children’s ability to use symbols (Johnson, Christie, et al., 1999; Singer & Singer, 1998; Spodek & Saracho, 1998). Creative thought can also be viewed as an aspect of problem solving, which has its roots in play. When young children use their imaginations in play, they are more creative, perform better at school tasks, and develop a problem-solving approach to learning.

According to Dr. Fraser Mustard of the Council for Early Development, “problem-based play programmes optimise development of neural pathway during all period of early childhood.” Recent research on neurological development confirms that exploring the world through play, movement, language, and hands-on activities are essential to a healthy childhood.

This article was first published on the EtonHouse Blog.

Kids love card games but when they are young they… [...]