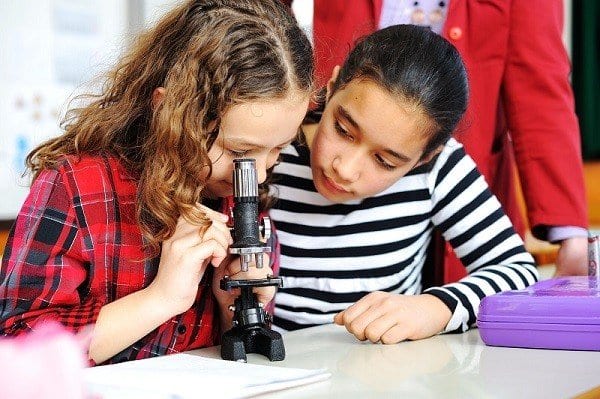 A few nights ago, I took my 7-year-old daughter out for dinner at our favorite Mediterranean restaurant.

After examining the menu, we decided to order a whole sea bass to split among us. It’s become something of a tradition to order an entire fish when we go to this restaurant. It’s not just because we love seafood (and we do). It’s because I love watching my daughter turn dinner into an experiment. She’ll dissect the fish, examine its bones and pick out the eyeball. Little does she know, she’s doing science.

As a cognitive scientist myself, I’d be happy if my daughter chose to pursue a career in science, technology, engineering or math and helped close the persistent gender gap that exists in STEM fields. But I also know that how I talk to her about science — and the science we do together — impacts how she feels about the subject, even when that science is informal in nature.

More parents are acting as STEM cheerleaders for their daughters, telling them they can be physicists or computer scientists when they grow up. But while encouragement is important, new research shows that telling young girls they can be scientists — rather than do science — can actually stifle their interest and motivation.

It’s around preschool age that children’s concept of identity really starts to take shape. They begin to understand how certain behaviors correspond with personality traits — for both themselves and others. They begin to form ideas about what they can do and what they can’t, where they belong and where they don’t.

When preschool-age children are introduced to science — whether in the classroom, at a museum or even while watching PBS — it’s usually in very basic terms: “Scientists solve problems”; “scientists discover new things”; “scientists are explorers.”

These types of statements sound innocent enough, but they actually paint scientists as a group of people with very distinct skills and interests. And, when young girls don’t think their own interests and abilities matches up, or don’t see anyone who looks like them “being scientists,” they may feel like science isn’t for them.

Though we can’t close the gender gap in STEM fields overnight, we can change how we communicate with girls of all ages and inspire their interest in math and science: Don’t tell girls they can “be” scientists; encourage them instead to “do” science.

Let’s go back to the aforementioned research on being vs. doing science for a moment. In the study, researchers had preschoolers doing basic classroom science experiments — like asking a kid to smell what’s in a covered cup and guess what’s inside. Some kids were told they were “being scientists”; others were told they were “doing science.” They then got an opportunity to do more science activities — if they wanted to.

For girls, whether or not they chose to do more science was related to what they were told. When girls heard they were “doing science,” they wanted to continue; when they were told they were “being scientists,” they were less interested in going on. For boys, what they heard didn’t have the same effect.

When I frame things like picking apart a whole fish at dinner or measuring ingredients to make pancakes as “doing science,” my daughter jumps at the chance to participate. When girls view science as an activity they can partake in, they’re more likely to push themselves and pursue STEM opportunities. When we change how we talk to girls about STEM, we change how they view science.

Whether parents think math and science are important matters, too.

In my own research with colleagues, we have shown that when parents value STEM, their children do better in STEM subjects in school. When parents who are anxious about math, for example, are given the opportunity to do fun math activities with their kids, parents start valuing math more. They think math is important — and important for their child to do well in. My colleagues and I have found that parents’ attitudes about math, in turn, relate to how much math their kids learn over the school year. A mom saying to her daughter, “It’s ok, I am not a math person and I turned out fine,” sends a strong signal to her daughter that math isn’t something to engage in.

Even in high school, it’s important that parents openly value STEM, and encourage their children — especially their daughters — to pursue STEM. A recent study found that parental support is crucial to high school students pursuing STEM classes and careers. When parents understood the importance of STEM for their kids, their kids actually took more math and science classes in high school and did better in them.

It’s also important for young girls to view examples of women scientists. But instead of framing these careers as something they can be, let’s show them science as something they can do. I make a point of highlighting these women to my daughter throughout our daily lives. When we go to the aquarium, I let her know that there are women who study sharks for a living, and that they do science every day. And when my daughter is with me on Barnard’s campus, I stop and chat with every female scientist we see and let her hear, firsthand, all of the ways they do science.

Ultimately, when we change how we talk to girls about STEM, we change how they view science. If we build their confidence — and, yes, let them dissect a few fish at the dinner table — they can see that science is a strong option for them. And though not all young girls will grow up to be physicists, or marine biologists or biochemists, they won’t question whether or not they belong.

The post OPINION: How to get girls into science appeared first on The Hechinger Report.