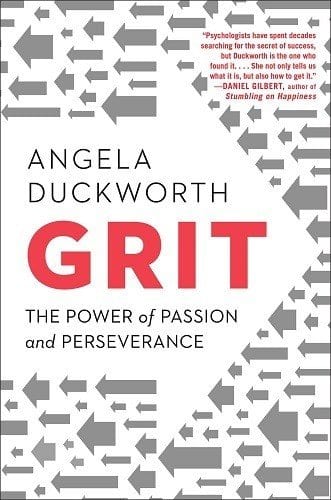 So apart from delayed gratification being a predictor of future success, as documented in Walter Mischel's book The Marshmallow Test, “grit” – a special blend of passion and perseverance, does the same thing too. Well, at least that's what Angela Duckworth seems to imply in her book.

Drawing from her studies, Duckworth found that grittier adults were more likely to get further in their formal schooling. Here's what she has to say:

“Adults who'd earned an MBA, PhD, MD, JD, or another graduate degree were grittier than those who'd only graduated from four-year colleges, who were in turn grittier than those who'd accumulated some college credits but no degree. Interestingly, adults who'd successfully earned degrees from two-year colleges scored slightly higher than graduates of four-year colleges. This puzzled me at first, but I soon learned that the dropout rates at community colleges can be as high as 80 percent. Those who defy the odds are especially gritty.”

Does that mean people like Steve jobs and Bill Gates were not gritty enough?

I doubt so. High achievers not only have determination, they have direction. Duckworth explains that grit isn't just about working incredibly hard. If you don't believe, check out the Grit Scale that the author created, which allows you to calculate separate scores for two components: passion and perseverance. However, she cautioned that, when “taken honestly”, the Grit Scale measures the extent to which you approach life with grit – meaning you can game the test with a bit of disingenuity. Furthermore, your score reflects your current status, so if you re-take the test again in future, it might be different. To understand more about how your passion and perseverance scores should be interpreted, read “Chapter 4 – How Gritty Are You?”.

Anxious parents, in particular, should bear in mind that although half of grit is perseverance, “nobody works doggedly on something they don't find intrinsically interesting”. In fact, overbearing parents and teachers often erode motivation. Kids whose parents let them make their own choices about what they like are more likely to develop interests later identified as passion.

For parents who don't want to be bogged down by the technicalities of the Grit Scale, you may wish to fast-forward to Chapter 10 on “Parenting for Grit”. Here, you will read about the two different perspectives on the parenting continuum and reaffirm what some of you may know about parenting styles.

If you are unsure, you can use the parenting assessment developed by psychologist and parenting expert Nancy Darling (what a name!) to find out your parenting style.


You can also pick up a tip or two from Duckworth's Hard Thing Rule, which she uses to encourage grit without obliterating her children's capacity to choose their own path.

The Hard Thing Rule has three parts:
1. Everyone in the family has to do something that's hard.
2. You have to finish what you start.
3. No one gets to pick the hard rule for anyone else.

One gripe I have about books of this nature is that there are lots of cross-referencing to other researches, e.g. Carol Dweck's study on fixed/growth mindset. Unfortunately, the relevance of some examples to her own study on grit was lost on me.

Duckworth's research may be less technical and less conclusive compared to Mischel's decades of marshmallow tests, but her book is an entertaining read and you probably don't need a lot grit to pull through the 300+ pages.

And if you're a fan of Angela Duckworth, check out the “No Stupid Questions” podcast where Stephen Dubner (co-author of the Freakonomics book series) and Duckworth take turns asking each other a question like: Why is it so hard to predict success? Can charisma be taught? Is everybody cheating these days? Does psychotherapy actually work? Which gets you further, talent or effort? Have we all lost our ability to compromise?

“Character skills” such as perseverance, sociability and curiosity, will be increasingly important in a world of greater automation: https://www.economist.com/news/special-report/21700760-artificial-intelligence-will-have-implications-policymakers-education-welfare-and

[…] Victoria Sisk was an undergraduate student at Case Western Reserve University in 2015, she watched Stanford psychologist Carol Dweck deliver an online TED Talk about the power of having a “growth mindset,” a theory Dweck […]