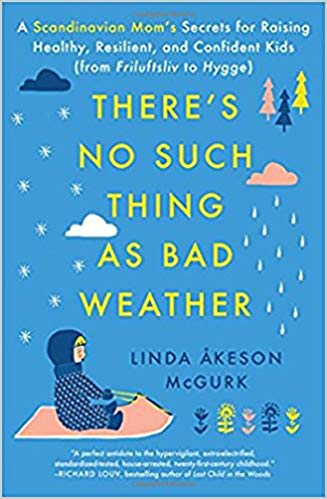 There's No Such Thing as Bad Weather: A Scandinavian Mom's Secrets for Raising Healthy, Resilient, and Confident Kids (from Friluftsliv to Hygge) touches on an important aspect of early childhood development that many parents and educators in the digital age tend to neglect. Written in a part-memoir, part-research style, the anecdotal evidence cited by Linda Åkeson Mcgurk is often backed up by relevant studies and interviews with professionals in the field.

The book also provides a fascinating contrast in the regulatory framework for outdoor play between the Scandinavian countries and the US. The “land of the free” is not so free after all.

There's a glossary of Scandinavian terms at the beginning of the book to help you get started. Even if you can't tell your mula from your Mulle, you will have no difficulty identifying with the plight of the author in getting her kids to adapt to Scandinavia's nature-centric culture, friluftsliv (which loosely translates to “open-air life”).

In Sweden (where the author grew up), nature is not an abstract concept that is taught only on Earth Day. Recess, for instance, makes up approximately 20 percent of the school day in Sweden and most of which is spent outdoors.

Kronans Apotek, one of the largest pharmacy chains in Sweden, offers the following advice for flu season on its website: “The first step toward fewer runny noses and less coughing is to let the child spend as much time outside as possible. When children are outside, the physical distance between them increases, which reduces the risk for contagion through direct contact or the air. The more time spent outside the better.”

You've got to give it to the Scandinavians for their enlightened views on play (and parenting in general). While parents in Asia probably do not have to agonise over inclement weather in similar fashion, many of the examples highlighted in this book provide plenty of food for thought.

Psychologist Peter Gray, who is a thought leader on risky play, goes as far as saying that the decline in children’s play has contributed to a massive increase in mental disorders among young people the past decades. http://rainorshinemamma.com/parents-stop-worrying-and-let-your-children-climb-trees/