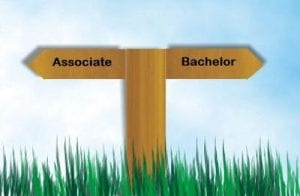 There really are few ways to compare a two-year education with a four-year education that would be fair to either degree programme. The truth of the matter is that both are good for certain things but both also have some limitations. Here is a list of pros and cons that will make excellent food for thought.

Pros
When it comes to a two-year college programme, there are several things you should consider in its favor before you take the plunge. First of all, you should keep in mind that the degree or certification at the end of your studies doesn’t necessarily indicate the end of your education. Two-year degrees are excellent starting points for four-year degrees but also allow you the option to venture out into the workplace with your own skills and knowledge that will allow you greater earning potential than a high school diploma. You will also have the benefit of entering the work place much sooner with an associate’s degree than with a bachelor’s degree. Most importantly, for many who are limited by budgets, two-year colleges offer an affordable alternative for an education.

Cons
The biggest cons that most people find when it comes to getting a two-year degree is the growing competition for limited jobs. In fact, it is difficult to remain competitive in any industry when there are more and more entering the work force with bachelor’s degrees. It is simply more difficult to maintain a competitive edge with only a two-year degree though it is not impossible. The other obvious con when it comes to two-year college degrees is the fact that some positions will not even consider anyone with less than a four-year degree. This means that you aren’t even in the running required to worry about competition.

Pros
A bachelor’s degree will give you far greater earning potential in your lifetime than a high school education without a doubt. It will also place you in a position of serious competition within your chosen field or industry. This means that you will often be given preference when seeking jobs over those who do not have degrees or those with lesser degrees regardless of experience. There is also not enough that can be said about the personal confidence that goes along with earning your degree. You will find that you are much more confident on both a personal and a professional level once you’ve earned your bachelor’s degree.

Cons
The single largest con associated with a bachelor’s degree is the expense. Both in terms of time and money, bachelor’s degrees exact a price. You should be certain that you are both willing and able to pay that price before setting out to get your degree.