“Failure is simply the opportunity to begin again, this time more intelligently.” – Henry A. Ford

I was never one to embrace the mindset that failing at anything was good for you. For the most part, my educational experiences kept me in a box where success was determined by the destination, not the journey. Grades and marks were the main indicators of how well I did and with a few exceptions, the learning process focused on a linear path. As I have grown as a professional and learner, the one thing I now believe in without a doubt is that success and learning follow a similar path, which is anything but linear and often a convoluted process. It is important that we as adults understand this if we are to transform learning in an effort to improve education for students at scale.

Failing forward is the ability to reflect on unintended consequences in pursuit of goals and ultimately achieve success. It requires a mindset rooted in determination, self-efficacy, patience, resilience, creativity, big-picture thinking, and accountability. Above all else, you need to believe in yourself and your own unique abilities. Quite often I speak on the need for the profession of education to redefine success and learning.  When doing so I point to the acronym that many people now use for the word FAIL: First Attempt in Learning. So, what does this really look like in the context of transformative learning, innovation, and success? Look no further than famous failures throughout the course of history who persevered after many failed attempts to succeed. 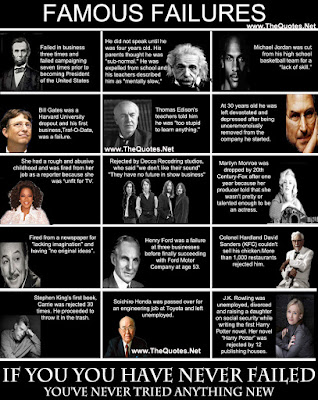 Now there are numerous famous people who have failed forward. One of the stories that I like to share most often is that of Henry Ford. Not only is his story inspiring, but the quote at the beginning of this post is one of the most powerful quotes related to learning that I can think of. I read a great summary about Ford on the Intellectual Ventures blog. He was an amazing entrepreneur and as history has shown he optimized transportation forever changing the automobile industry. Even though he succeeded, Ford experienced numerous failures. From the lessons learned he was able to fail forward to eventually develop an automobile manufacturing process that was cost efficient, produced reliable vehicles, and paid workers well all while creating a loyal culture.

The Intellectual Ventures post goes on to summarize the two main failures that Ford experienced:

The capital was difficult to attain and in the late 1800s, no one had established a standard business model for the automobile industry. Ford convinced William H. Murphy, a Detroit businessman, to back his automobile production. The Detroit Automobile Company resulted from this union, but problems arose shortly after its creation. In 1901, a year and a half after the company began operations, Murphy and the shareholders got restless. Ford wanted to create the perfect automobile design, but the board saw little results. Soon after, they dissolved the company.

Ford recalibrated his efforts after his first failure. He realized that his previous automobile design depended on serving numerous consumer needs. He convinced Murphy to give him a second chance. However, their second venture, the Henry Ford Company, stumbled from the start. Ford felt that Murphy pressured him to prepare the automobile for production and set unrealistic expectations from the beginning. Shortly after Murphy brought in an outside manager to supervise Ford's process, Ford left the company, and everyone wrote him off.

These two failures could have been career-ending, but Ford continued. Several years after the second parting with Murphy, Ford met Alexander Malcomson, a coal magnate with a risk-taking spirit like Ford. Malcomson gave Ford full control over his production, and the company introduced the Model A in 1904.

For Henry Ford, failure did not hinder innovation but served as the impetus to hone his vision for a technology that would ultimately transform the world.

The story of Henry Ford is so empowering, as he did not let failure inhibit his resolve to succeed. Each failed attempt to revolutionize the automobile industry provided the vital learning lessons he needed to create something amazing. The story is the same for virtually every other famous person who did not succeed at first. You must have a desire to change. Then you have to follow through with the process of change, which will not always go the way you would like. Ultimately, we must believe in our abilities to transform ideas into actions that produce a better, more successful result.  History has taught us that we should never doubt the difference one person can make with the right attitude and commitment to be the change. Those who fail forward change the world.

Achieving success in the real world is rarely easy. It is a convoluted process fraught with obstacles and unforeseen challenges. That same goes for learning. If it is easy, then it probably isn't learning. Our learners also need to see the value of failing forward. The transition from Quad A learning to B, C, and eventually D as outlined in the Rigor Relevance Framework helps to give students a deeper understanding of concepts through authentic application. Quad D learning sees failure as being an iterative component of the learning process. Take a look at the image below that illustrates the power of Quad D learning to push students towards deeper thinking and application. 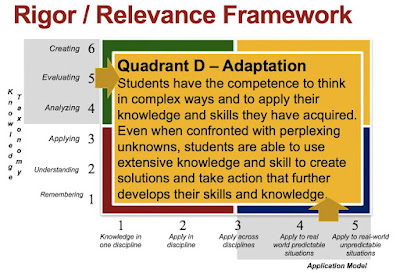 It is not what students ultimately know that really matters, but what they actually understand. When students are able to solve complex problems, even though they might experience setbacks along the way, critical competencies are developed that will prove invaluable in the future. This is key if we are to groom the next generation of inventors, thinkers, and entrepreneurs poised to succeed in the new world of work.

Whether it is success in the real world of the classroom, failing forward requires an unwavering belief in our abilities as well as getting students to believe in theirs.