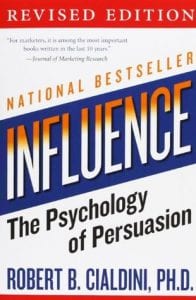 Influence: The Psychology of Persuasion by Robert Cialdini is a fantastic read. There's so much to unpack here. The book details the most common approaches to influencing the decisions of others, or what Cialdini calls “the six weapons of influence”. The author even backs up his findings by infiltrating several organisations to learn the tricks of the trade.

Due to the pace of modern life, we often do not have the luxury of time to use all the relevant available information in making a decision about someone or something. Instead, we employ the factors of reciprocation, consistency, social proof, liking, authority, and scarcity as shortcuts to avoid having to conduct a complete analysis of a situation, which may take up considerable time, energy, and cognitive resources.

The power of consistency

For parents buying Christmas presents (such as toys) for their kids, the author warned that toy manufacturers routinely undersupply retail stores with the toys they've gotten you to promise as presents through their advertising blitz. These manufacturers, however, make a point of supplying the stores with plenty of substitutes instead, which you will have to buy because you do not want to disappoint your kids. Then, after Christmas, the companies start running the ads again and this time round, you will not find the toys out-of-stock and you will have to buy it because you promised (remember?). Accordingly, this is how big toy companies jack up their January and February sales following the Christmas lull.

The book also provides an explanation of why teenagers go through the ordeal of hazing ritual of Greek-letter societies on college campuses, together with a list of tragic incidents arising from these rituals.

Some of the weapons of influence seemed to intertwined. For example, on the point of scarcity, the author says that “the parent who grants privileges or enforces rules erratically invites rebelliousness by unwittingly establishing freedoms for the child. The parent who only sometimes prohibits between-meal sweets may create for the child the freedom to have suhc snacks. At the point, enforcing the rule becomes a much more difficult and explosive matter because the child is no longer merely lacking a never-possessed right but is losing an established one.” As you can see, this point relates to consistency as well.

Reading this book, I realised that there is a thin line between influence and deception (or manipulation if you like) as the author outlines several dubious tactics (such as lowballing) that “compliance professionals” use to get things their way.

Cialdini further explains how certain types of influence can lead to negative outcomes, such as pluralistic ignorance, blind obedience and the bystander effect. Fortunately, the author also outlines what can be done to overcome these negative outcomes. Particularly instructive are the segments on how to say no to these influences, although…

“If we always assume the worst, it would not be possible to receive the benefits of any legitimate favors or concessions offered by individuals who had no intention of exploiting the reciprocity rule.”

As such, the author argues that a policy of blanket rejection [of favors or gifts] seems ill advised.

In the epilogue, the author sums up why it's important to retaliate against exploiters of weapons of influence as not doing so will lead to our hitherto reliable shortcuts being undermined by those who don't play fairly by the rules. Consequently, we will use these shortcuts less and will be less able to cope efficiently with the decisional burden of our increasingly complex life.