One of my fondest memories of school was my science teacher, Mr. South. Having attended a K-8 consolidated school in rural NJ, we knew who all the teachers were. However, Mr. South stood out. I remember an elementary student seeing paper flyers with a caricature of Mr. South wearing one of his famous flannel shirts. As the years passed, he transitioned from flannel to a dress shirt, tie, and jeans. He was stylish in the sense that he always got students and staff alike to talk about what he was wearing over the years.

There was a reason why everyone talked about Mr. South. He was an amazing teacher. Every student in the school could not wait to take his class. Since our school was small, there was a chance you could even have him multiple times before moving up to the high school. What separated Mr. South from his peers was his passion for helping students learn and love the sciences. His lessons were light on direct instruction and heavy on authentic connections and application. He didn’t teach science. We learned science.

All of his classes were amazing. He is the main reason I pursued a degree in science initially, before taking this passion to the field of education. There was one project in particular that has stuck with me to this day. Instead of lecturing to us about Mars he had us actually create Mars in the classroom. Students were broken up into teacher-selected groups that had different tasks to complete. The specific task of each group played a larger part in the Martian project. My partner and I were tasked with getting materials to Mars in order to create an infrastructure on the planet. Through our research we came across a device called the mass driver. We presented our finding to Mr. South and he gave us the tasks of creating 2 different working mass driver prototypes

During school and after school, my partner and I worked on developing these miniature prototypes that would actually propel mass. This was certainly a frustrating experience, as we were never really asked to learn like this before. Countless hours were spent outside of school working on this project. We even went to Mr. South’s house on weekends so that we could use the many different tools he had in his garage. Through it all we owned our learning by being engaged in thoughtful work and made numerous connections to other disciplines. The process in itself was fraught with highs and lows, but in the end we developed the two working prototypes as assigned while learning with our hands.

Over a period of a couple of weeks each group worked to complete their assigned tasks. The final step was then to actually create Mars in the classroom and that is what Mr. South had us do. It was controlled learning chaos that involved tools, wood, paper mache, collaboration, communication, black lights, and so much more. When thinking of makerspaces today, our learning experience in his class was one connected to the guiding principles of the maker movement.  Once the surface of Mars was completed each group set up stations throughout the planet to present their specific projects. The culminating activity was a multi-night presentation to parents and the greater community where each group showed off a thriving community would hypothetically be created on Mars. 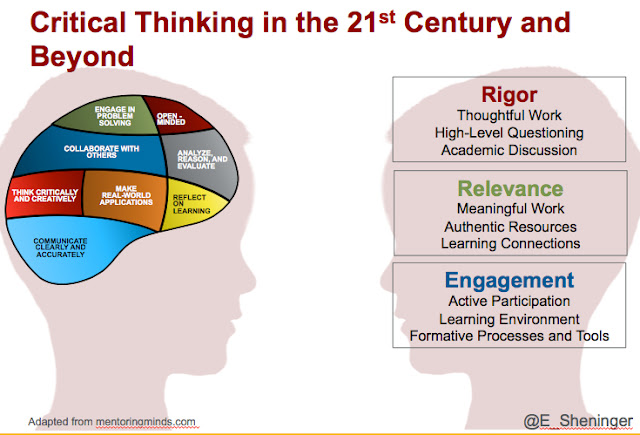 This was by far one of the most powerful learning experiences I ever engaged in as a student.  Mr. South had us actively learn science instead of just taking notes and then a traditional assessment. It was relevant, meaningful, and fun. Real-world predictable and unpredictable problems were tackled. We developed the competence to think in complex ways and to apply knowledge and skills. Even when faced with perplexing unknowns, the pedagogy employed by Mr. South allowed us to use extensive knowledge and skills we didn’t know we had to create solutions and take action to further develop skills and knowledge. At ICLE this is what we call a Quad D learning activity.

Many of the 21st Century skills that are emphasized today were evident in the project that took place in 1988. It is not that this type of learning is new. Heck, everything we see and hear for the most part is not new. What has changed is how technology provides a new avenue to actively integrate this type of learning in ways that many of us could never have imagined. The key is to focus on project-based and authentic inquiry. Taking the example I presented from my schooling consider the following elements and the ubiquitous role technology should play:

These elements, when aligned with sound pedagogy, can provide students with the types of learning opportunities that they will carry with them no matter what path they choose.