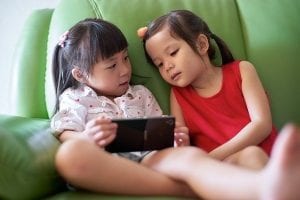 Young children can learn just as much from a story delivered entirely via a digital device as they can from an adult reading a dead-trees version of the same story, according to a study from researchers at New York University.

The quality of the content matters more than the format it’s delivered in, according to the study.

“This should calm family fears that digital media is not necessarily a good thing,” Susan B. Neuman, professor of childhood and literacy education at New York University’s department of teaching and learning, said in an interview. “It can be a good learning tool, if used properly.”

This should calm family fears that digital media is not necessarily a good thing. It can be a good learning tool, if used properly.
Susan B. Neuman, professor of childhood and literacy education, New York University

The small study of 38 children in a Head Start preschool program sought to find out whether oral language comprehension differed if a story was delivered by a digital device or by an adult reading a words-on-paper storybook to the child. The children watched and heard the digital story on an app called Speakaboos that uses audio and pictures with action. The researchers adapted four of the digital storybooks to paper format for the study.

The findings are significant because the debate about children’s exposure to digital devices – known as “screen time” – is an enduring source of consternation for parents and teachers. That hasn’t stopped the march of technology in schools. Even in preschool classrooms, the amount of technology has been rapidly growing: In 2015 more than half of preschools surveyed by Northwestern University reported digital devices were available in the classroom.

A growing body of research suggests that limiting the number of screens a child sees might be more than unrealistic. It might be unnecessary. That energy might be better spent ensuring that children are accessing high quality content – no matter the medium.

Until recently the American Academy of Pediatrics recommendation was no screens whatsoever until the age of 2. The academy loosened those guidelines last year, allowing for limited time with quality media, but as any parent of a child knows, playing keep-away with screens is a Sisyphean task.

The study on digital storybooks is part of ongoing research at NYU that is exploring how children can learn (or not) through digital media.

“You can see that kids are going to do it anyhow,” Neuman said. “Go to any restaurant and you will see children amused by it. But are they watching appropriate stuff?”

The post Digital storybooks might be just as good as an adult reading to a child appeared first on The Hechinger Report.