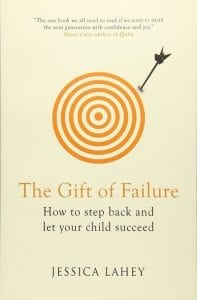 “All of us want the best for our children, but are we going about it the right way?” asks Jessica Lahey in The Gift of Failure, which is packed with case studies and practical advice. Lahey, a teacher and a contributing writer at the Atlantic, shares her personal epiphany that led her to give up on her over-parenting tendencies. And it has to do with the simple act of tying the shoelaces.

The vital shift in Lahey’s parenting approach was due to the realisation of an important discovery: if parents back off the pressure and anxiety over grades and achievement and focus on the bigger picture – a love of learning and independent inquiry – grades will improve and test scores will go up.

It may sound counter-intuitive, but the less we push our kids towards educational success, the more they will learn. When babies take their first steps, it is because they are driven to discover and master their environment, not because of some extrinsic rewards. To support her point, Lahey highlights the research by psychologists Harry Harlow and Edward Deci:

In 1949, Harlow became curious about what motivated primates (and, by extension, humans). He gave eight monkeys, each in its own cage, a latch attached to a piece of wood, and waited to see what they would do with it. He didn’t have to wait long; the monkeys loved playing with the latches, and fiddled with them over and over again until they opened up. The monkeys were opening the locks just for the fun of the activity, or, in Harlow’s words, “the performance of the task provided intrinsic reward.”

In the second phase of his experiment, Harlow gave half of the monkeys a raisin as a reward for opening the locks. The monkeys were quite good at opening the locks, so surely, given a reward, they would open them even faster, right? Nope. The monkeys who received raisins actually opened the locks more slowly, and with less frequency, than they did when no reward was offered.

Deci, author of Why We Do What We Do: Understanding Self-Motivation, invited student test subjects into his lab to solve the Parker Brothers game Soma, “the world’s finest cube puzzle game”. Some of the students received a dollar for every puzzle solved, and some received nothing and had to rely on their own feeling of satisfaction. After the subjects had solved a few puzzles, Deci would leave the room for eight minutes and the subjects were left alone in the lab with the puzzles and an array of magazines. During those eight minutes, the subjects were secretly watched by the researcher to see how they spent their free time. The students who were being paid to complete the puzzles were much less likely to play with them, while the subjects who were not being paid continued to play, just for their personal enjoyment of the activity.

After a few more studies in this vein, Deci concluded that just about anything humans perceive as controlling is detrimental to long-term motivation, and therefore, learning. Hence, the quickest way to kill off your child’s interest in anything is to impose your will on his learning.

There are ways to motivate your child without bribing, supervising, or imposing goals and deadlines. Lahey cites a subsequent experiment that Deci conducted to explain this. It’s too long to outline it here so you’ll have to read the book to find out for yourself.

You should also read Lahey’s personal dilemma about her son’s forgotten homework, which she shared on Facebook and received a contrary opinion. The rationale for her eventual decision is outlined in the book.

The book starts off with a brief history of western parenting and how failure became a dirty word:

In the early part of 20th century, unsafe child labour practices led to the creation of child labour laws that prevented children below a certain age from working outside the home. School attendance became mandatory. The result of these reforms is that children were transformed from “useful to useless” from the perspective of the family and a society that measured a child’s worth by his utility. “Parents were thus left to cobble together new parenting goals in order to raise these very expensive, non-productive offspring.”

Anxious parents began to teach their children that their potential is tied to their intellect, and their intellect is more important than their character. The end result? Kids who get straight A’s but hate learning. Kids who achieve academically but are too afraid to take leaps into the unknown.

Lahey draws on many resources for strategies to deal with the fear of failure, including duct-tape parenting and how to create new habits (based on The Power of Habit by Charles Duhigg). She also highlights what psychologists Elizabeth and Robert Bjork call “desirable difficulties” (which is discussed extensively in the book David and Goliath).

Overall, The Gift of Failure is a fascinating book for parents who want to raise resilient kids but is afraid to start.